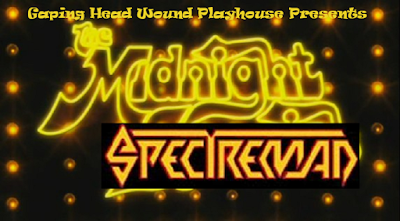 Spectreman is dead. No, really. After his climactic battle with Moonthunder, the cyborg hero and his adversary toppled into a fiery volcano as it erupted. Overlord, not wanting to waste money on an investment, transports Spectreman's remains to the star laboratory to repair him, but the rest of the world is left to believe that Spectreman and George are both coincidentally dead ("yet they'll never know the face" and so on).

Taking a page from the Ultraman handbook, the Pollution Research Bureau decide to start taking after their original name in the Japanese series, the Pollution G-Men. With Spectreman dead, they have no choice but to go back to Ultra Q roots and face the menace of giant monsters without the aid of a giant alien superhero (highly convenient as these episodes will run after another episode of Ultra Q on #Bmoviemaniacs), and they even get some spiffy new wardrobe and laser stun guns.

For no reason at all, they also get a new female lead named Sally, never explaining what happened to Rita or Margaret. Spoiler alert: Sally won't be around forever either. The female membership of the Pollution Research Bureau/G-Men has a revolving door.


If you have seen these two women,
please call 555-KARAS

Dr. Gori couldn't be happier with Spectreman's death, but he decides to throw down his strongest card by summoning the most terrifying monster in the galaxy, Vegaron.


After a nice mountain pose, Dr. Gori tells Vegaron to have his fill of tiny human morsels on this mud ball. Once they are out of the way, Gori can start building his new empire. I'm not sure what good an empire is without slaves, but I guess he has his plan.

I'm not sure that the Bureau/G-Men have instilled in me a lot of faith in their competence, and I'm not sure they'll instill any more of it in you either when they try to take on Vegaron all by themselves. Imagine Perry White, Lois Lane, and Jimmy Olsen going up against Brainiac. It's kinda like that. Overlord goes full A Clockwork Orange on Spectreman, making him watch the events unfold as the helpless Earthlings are about to get trounced but good and refusing to let him come to their aid until his repairs are completed. Meanwhile, Dr. Gori has established a new ground base somewhere on Earth, and he's going to get his hands dirty coming in contact with damn dirty humans for only the second time since way back in episode 3.

This marks a major change in the tone of the series as George's friends take a more action-packed role in protecting their planet from Gori's schemes. Join us Friday night after #Bmoviemaniacs' third installment of Ultra Q as we wrap up another Friday night with toku goodness. Oh, and Greenman will be there, too. There are still two more available subtitled episodes, and I'm not going to leave them out.

Note on the future of #GHWP:
Following this Friday's episodes, Spectreman is going to be moving to Friday nights for the month of August. We are moving past the halfway point, and I might not be available every Tuesday night from here on out. Additionally, we get a handful of different people that are available on Friday more often than Tuesday, so I would like to increase their chances to tweet along. When I am available, I am considering padding my normal Tuesday night schedule with other material because I have a few movies I've had on the backburner since the very beginning. Spectreman took over my entire live tweet schedule, and I've only been able to fit a few odds and ends in between. We're still looking for an audience for a GHWP DVD Theater presentation of Message From Space, so if you have that in your collection and would like to join, then please RSVP @1oldlostsoul, @bunnyhero or myself, @QuandaryMan that you are on board so that we can set a time and date. There are a few other movies on my list, and I would like to host a couple more episodes of The Hypnotic Eye as well. I'll keep everyone posted, but be on the lookout for GHWP's 10 O'Clock Tuesday Movie in the very near future.
Posted by The Quandary Man at 1:53 AM No comments:

The Quandary Man
I'm a primitive man from the future. Come explore my early childhood with me and see how it all went horribly, horribly wrong.